Who doesn’t love the flavor of s’mores. How do you like your marshmallows – lightly toasted or charred? On our honeymoon, our resort had complimentary s’mores one night. I told Jeremiah we had to go. He probably could have cared less but indulged my request. We got their shortly after it began and the line was pretty long. We stood in line for probably like 20 minutes to get our s’mores. You would not believe the amount of mosquito bites I got just to eat a s’more.

For our 1st anniversary, I made this recipe to take to my in-laws for July 4th. We ended up not going because of crazy rain. They are pretty tasty but not very healthy so I shared this recipe with my coworkers. Delicious when eaten warm. 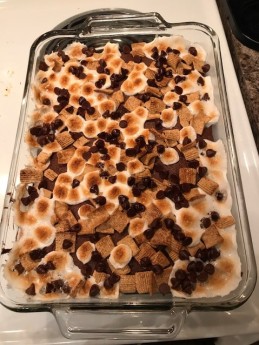 In a large bowl, cream butter and sugar together until light and fluffy. Beat in the eggs and vanilla. Add flour, cocoa, and salt. Pour into greased 9 x 13 pan. Bake at 350 degrees for 25-30 minutes. When finished, preheat broiler. Sprinkle with marshmallows and cereal. Broil for 1-3 minutes. Remove and top with chips. Cover with foil and let it stand for 5-10 minutes until chocolate begins to melt.

When I was a child, my Great Grandma Kingston used to always make Rice Krispies Treats for our birthday parties. My Great Grandma Reith would make homemade ice cream. I had party cool great grandmas, right?

I used to help my mom a lot in the kitchen. One treat that I always avoided helping with though was Rice Krispies bars. They were a hot gooey mess to stir and get to stick in the pan. As I got a little older, Kellogg’s started packaging and selling these treats in the grocery store. I tried making them once in college but I learned quickly it was easier to buy the pre-made ones. My rule is if someone can do it better than you for a cheap price, buy it. They are also great treats to ship to service men and women serving our country overseas.

A few weeks ago, I ran across this recipe in the Hy-Vee ad for Simple Cereal Bars. The ad featured FrootLoops, Frosted Flakes, and Apple Jacks bars. I decided if I wanted another treat flavor, I would have to give it a try. The directions suggested making it on the stovetop. My mother used to use the microwave so I thought this might be a bit easier. I selected my large oblong Rachael Ray pan. I also sprayed both the 13 x 9 pan and silicone spoon with non-stick spray. I really think both of these things helped. Recipe challenge accepted and achieved. Pick your favorite cereal and give it a try.

When I was a kid, my Grandma Fletcher used to recruit us grandchildren to help her with preparing for the holidays. Grandma went all out – live Christmas tree, Dickens Village, homemade ceramic Old World Santas, and making holiday treats. When I think of Grandma, I think of fudge and peanut clusters. The trick to making Grandma’s Peanut Clusters is adding Spanish peanuts and mini-marshmallows.

Now if you have read any of my post about my Grandma Fletcher, you know she doesn’t measure when she bakes. That sometimes makes it hard to know exactly how to make one of her recipes. It is my understanding the Peanut Cluster recipe was originally my Great Grandma Kingston’s recipe – so Grandma Fletcher had years of experience cooking it with her mother.

After Grandma and Grandpa Fletcher started going to Yuma for the winter, there was no more preparing for the holidays with Grandma for us grandkids back in Nebraska. That also meant we didn’t get to eat these goodies anymore.

My uncle Ed used to tell his mother that all he wanted for Christmas was her Peanut Clusters. At some point, Ed realized that he needed to figure this recipe out before his mother passed away. Luckily, Grandma remembers all the ingredients so he had a good starting point. He played around with butter vs margarine and varying levels of sugar. Ed even went over to Grandma Fletcher’s and borrowed his Grandma Kingston’s pot she cooked the mixture in. After lots of trial and error, my uncle walked into my grandpa’s office one day and declared – “I think I got it.” He shared one with my mother and she concurred that they tasted just like the ones their mother and grandmother had cooked for years.

Lucky for you, my uncle Ed wrote down that recipe and shared it with the rest of us. Unfortunately, he passed way four years ago. When I think of my uncle Ed, this recipe and the love he had for his wife, children, and grandchildren are some of my fondest memories of him. 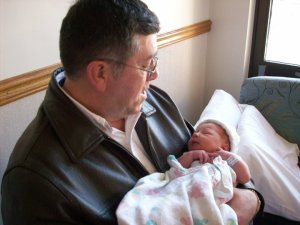 In a large pan, mix 6 c. sugar and 1 can of evaporate milk. Full boil for 5 minutes or until soft ball stage. Remove from heat. Add ¾ c. melted butter.

Note: If you don’t like nuts, just pour the chocolate (less nuts and marshmallows) into a 13 x 9 glass dish to make fudge.