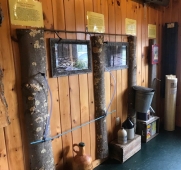 We learned that getting sap from a tree requires a very extensive string of plastic tubing to be drilled to the trees. When the temperatures in the spring first reach above freezing, the sap drips from the tree as the temperature drops below freezing at night. This usually happens in late March or early April. The sap runs through the tubes to a giant collection container. Those containers are then transported to process 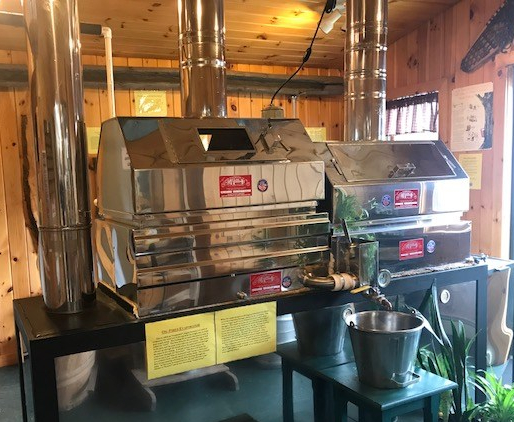 the sap through a boiling process to produce maple syrup. It takes 40 gallons of sap and about 45 minutes of boiling sap to make one gallon of maple syrup. Wow, now you know why really Vermont Maple Syrup cost so much. We also learned that Maple Creemes (soft serve ice cream with maple syrup swirled in) is very popular…and delicious. It’s actually pretty cool to meet the families who run these Sugar Houses. 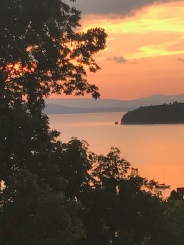 The syrup excursion was part of our Maple and Wine Tour with Greg. Following our visit to the Sugar House, we went to Boyden Valley Winery. This family farm has people producing maple, grass feed beef, and wine. In addition to ice and maple wines, Vermont’s oldest winery produces maple syrup aged in oak barrels. I learned I like oak ages syrup better than I like oak aged wine.

The state of Vermont only has a population of around 620,000 in the whole state. Despite a drought, this 14th state to the union lives up to its name which mean green mountains. The

state is very proud of local business. In fact, this is the only state in the country to not currently have a Target store. One lady at the airport was telling us that she traveled via fairy boat to New York with her daughter to return an item to Target. (Now that’s dedication to Target shopping.) Vermont is also home to the Green Mountain Coffee (Keurig maker), the Vermont Teddy Bear Company, and Cabot Cheese.

For this morning breakfast, I wanted to use a little of our new real maple syrup. 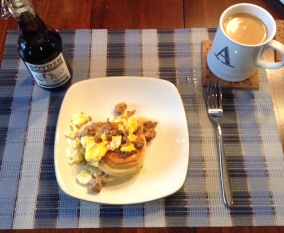 Bake biscuits on a baking sheet for 12 minutes at 350 degrees. Meanwhile, cook hash browns until golden brown on the stove top. At the same time, brown sausage on the stove top. You’ll also need to cook the scrambled eggs and milk in that skillet. Place hash browns in the bottom of a 13 x 9 baking dish. Top with ½ c. of cheese. Sprinkle with sausage. Top with scrambled eggs and remaining cheese. Bake for 10 minutes. Plate and drizzle with maple syrup.